Case Study: How the Terms Mouse Trap and Fire Training End Up in the Same Sentence 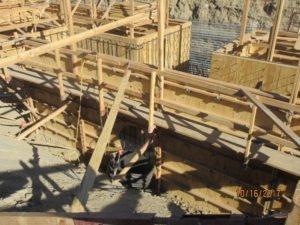 A mouse trap is a common, albeit annoying, word in suburban households. To most people, we picture a small slab of wood, a piece of cheese, and the impending doom for a little furry critter. A mouse trap, regarding to fire training, is a whole new ball game.

Helfrich-Associates was called out to a job site in the Inland Empire: A Fire Training Center. This state of the art training center will be utilized by fire departments and students in the surrounding area with every square inch of this training center being built meticulously. There are buildings that are being constructed specifically to be put on fire, but most interestingly, and why Helfrich-Associates is here, is the Mouse Trap.

When a Helfrich-Associate representative arrived onsite, there was a large pit set up right against a masonry wall (and property line).

The plan was to excavate and create a Mouse Trap (an underground confined space with tunnels for the trainees to practice lugging equipment around and to create real-life dire situations they will face in the field – hence the term “mouse trap”). The excavation for the Mouse Trap required an approximately 10-feet-high steep slope next to the wall that was planned to remain open for about four to six weeks while the Mouse Trap was constructed.

The questions the client had were as follows:

The biggest concern of our client was worker safety. There were crews building an intricate design of maze-like tunnels right up against the masonry wall, and the last thing anyone wanted was for the slope to cave in and hurt someone. Helfrich-Associates was onsite to perform tests and calculations to confirm it’s possible and secondly, to provide safety guidelines for excavations.

First, two hand auger boring were excavated at the project site. Two geologic units were observed onsite: artificial fill and very young alluvial fan deposits.  The upper unit, artificial fill, was gravelly, fine to coarse sand with cobble and trace silt, which was brownish gray, moist, and very dense in consistency.  The second unit, stratigraphically beneath the artificial fill, ranged from silty, fine- to medium-grained sand, to gravelly, cobbly, fine- to coarse-grained sand.  This material ranged in color from brown, to yellow brown, to gray brown and ranged from dense to very dense in consistency.

No groundwater was encountered within the hand auger borings. Regional groundwater was not considered to be a geologic constraint at this site, and the coarse, very permeable nature of the underlying soils likely will prevent development of any significant perched groundwater.

Slope stability analyses were performed for representative cross sections for the proposed slope and excavation conditions.  Proposed slope conditions were provided by the client and were verified in the field during excavation. These results indicate a minimum factor of safety of 1.2, which in Helfrich-Associates opinion, is acceptable for temporary conditions.

A month after the first site visit and calculations/recommendations were provided, the excavation began.

The final excavation side was stepped, with two, 4 feet tall vertical steps, and a 2 feet vertical step at the bottom of the excavation. The pipe that was a couple feet out from the wall was to remain in place and handled with care.

The pipe should be braced using diagonal bracing to the bottom of the excavation.  Braces should be placed at about 8 feet spacing along the length of the exposed pipe.

Vibrating and plate tamping compaction equipment were not to be used within 10 feet from the base of the excavation.  The subgrade soils were adequate to support the expected structure loads, and the soils did not need to be densified or compacted after the footing excavations have been made.

A month later, Helfrich-Associates visited the site to observe the progress of the construction.  No significant changes in the slope, wall, or pipe were observed.

The intricate design of the mouse trap is evident and great news… the wall and pipe are still holding strong with no evidence of movement.

Have you ever built or used a mouse trap like the one featured in this case study? Let us know how things went in the comments section, below. You can also join in on the conversation on our Facebook, Twitter or LinkedIn pages.