Dealing With A Roof Collapse 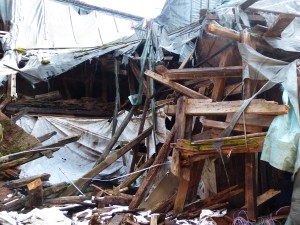 where to buy Pregabalin in canada Aftermath of a roof collapse – image courtesy of pixabay.com

site rencontre amis à montereau-fault-yonne A roof collapse can be sudden, dangerous, and devastating. Often, excessive loads can be the cause of a collapse. These loads can be weather related, involving things such as heavy snow or pooling rainwater. Another cause may be improper roof repair, such as failure to remove shingles or tiles when re-roofing or repairing leaks.

https://espluga.net/171651-dts51434-agencia-de-citas-en-sants.html Roofs are typically designed to support their own weight (consisting of framing members, sheathing, and roofing materials), plus the weight of expected live loads.  Live loads consist of people who might need to walk on the roof to service equipment or to perform roof repairs, and the estimated weight of ponded rain (if the roofs are flat), and accumulated snow (if the building is in a snow area).  Each of these conditions must be considered in the design of the supporting members.  One problem that is particular to flat roofs is the deformation of roofing support members that can cause water to pond on the roof.  Once the water begins to pond, the framing members deflect more, which leads to more ponding, which leads to more deformation.  An unstable condition is created in these roofs that can eventually lead to collapse of the roof.

Older structures are particularly susceptible to the cumulative effects of owner’s actions that can overload roofs.  One example of the catastrophic effect of an overloaded roof recently occurred in a 1920’s era craftsman-style home. The roof had been repeatedly re-roofed by prior owners who merely added another layer of roofing every time that the exposed roofing showed signs of deterioration.  Instead of removing and replacing the shingles, the person making the repairs added new shingles over the old shingles.  The cumulative effect of several episodes of re-roofing was to cause an excessive load that the roof framing could not support. In some areas of this house there was a thickness of least two inches of roofing shingles where the normal thickness is under half of an inch. That’s four to eight times the normal weight that the roof framing was designed and built to support!

The collapse in this case could have been avoided if the shingles had been removed prior to repair work. Alternately, if the owner did not want to deal with the expense of removing the shingles, the framing under the roof could have been reinforced to support the heavier load of additional shingle layers.

However, it wasn’t all bad news for the home owner. Luckily the expensive, custom woodwork installed across the ceiling was not damaged. Replacing the ceiling would have destroyed some of the beauty of the home.

If you need help with the aftermath of a roof collapse, please contact us. We can help.

Have you ever had to deal with a roof collapse at your home or business? What was the cause and how did you resolve the damage? Let us know in the comments, below.