When Your Pool Moves and Cracks 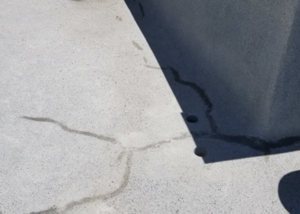 This unfortunate situation is an all too common occurrence in hillside residential developments across Southern California, where the earth is prone to continuous movement, earthquakes and periodic heavy seasonal rainfall. One or all of these factors can contribute to the destabilization of slopes where homeowners often buy properties with spectacular vistas of natural scenery, sunsets, wildlife and more. The problems then begin after the outdoor amenities such as patios, pools and spas are built, the contractor has been paid, the first family celebration and then months or years later the problems show up. 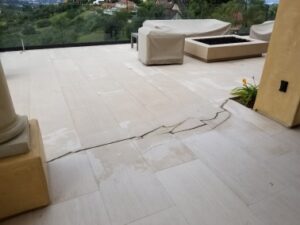 Cracks in this property’s surrounding patios show signs of lateral movement and separations that are generally parallel to the top of the descending slope below the pool. Patio separations are as wide as about 1/2-inch (suggesting horizontal movement due to lateral fill extension), and the pool was more than about 2-inches out of level (tilting down toward the slope). Repaired cracks were also observed in the pool shell.

The Party’s Back On!

Our recommendations consisted of installing 27 helical piers and 5 helical tieback anchors beneath the perimeter of the pool to resist future movement. Excavations to install the piers will be made on the exterior of the pool. Pier and anchor lengths are expected to range from 25-feet to 30-feet. 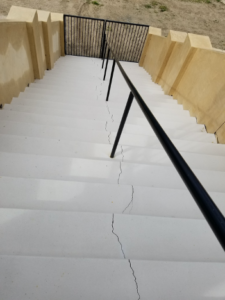 Everyone wants a pool at the top of a descending slope because of the views.  However, special design and construction factors must be considered when building a pool next to a descending slope.  Differential fill settlement and slope movement can cause significant damage to pools and associated structures (patios, bar-b-ques, spas). Get the right team with professional engineers involved during the initial design phase of your backyard improvements.

Otherwise, damage can occur—sometimes sooner or later.  When you’re investing significant money in a property that in a new construction development might even include a sizeable lot premium for that view or special location tucked into a hillside, request the services of an experienced, professional engineering team before you make outdoor improvements.  You’ll save a ton of money and avoid lots of unnecessary headaches.