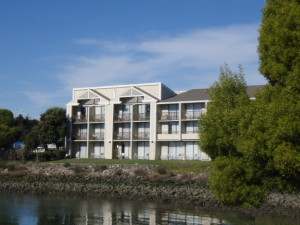 The DoubleTree by Hilton Hotel at Berkeley.

This week we’ll be covering our latest case study. In early 2011 Helfrich-Associates was asked to examine a hotel in the city of Berkeley and evaluate the structural integrity of a portion of the hotel.

The DoubleTree by Hilton Hotel at Berkeley Marina is located less than 5 miles from Emeryville and only 20 minutes from Oakland International Airport. The hotel is situated on Berkeley Marina.

The hotel, built in the 1970s, had a building that was suffering from titling due to uneven soil conditions. The building in question, number three (3), was built on a 12-inch thick, reinforced mat foundation that was not sufficient to deal with the settling of soft soils. As a result the building had tilted more than 20 inches.

Built over a former landfill, the hotel was as close as 20 feet from the bay. Over the years differential settlement had caused cracking of floor tiles, racking of doors and window frames, separation between cabinets and walls, and roof runoff to enter the building.

Read our latest case study to learn more about how we helped resolve the issues at the DoubleTree by Hilton Hotel at Berkeley Marina.