A Drainage Dilemma In Lemon Grove: It All Flows Downhill 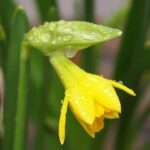 As we’re entering the month of March in Southern California, the heavy rainy season of winter is typically coming to an end. That doesn’t mean there won’t be any more rain, but the possibility of rain is tapering off. Spring will be here before you know it on March 22 with its longer days. It will soon be time to inspect our home drainage systems and make any needed repairs so we can check off this task as done on our maintenance calendars. Water generally flows downhill eventually and it’s best to make sure your drainage system is in good working order to protect your home.

For example, we recently were called to a home in the Lemon Grove community near Riverside, California. A relatively small sink hole had opened up in the homeowner’s back yard and had travelled across the property line and under a neighboring property.  This situation confirms why addressing your drainage issues is both sometimes a must-do repair when mother nature has her way and also a good neighbor policy . 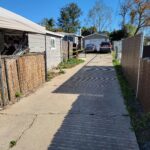 The sink hole opened up all the way beneath the neighbor’s driveway.  This sinkhole appeared after a particularly heavy rainstorm, which is a common pattern of sinkhole emergence.  The sink hole was approximately 4-feet in diameter and appeared to be about 12- to 18-inches deep.   It wasn’t huge as sinkholes go, but it wasn’t a mild settling or a low spot that could be ignored any longer or easily resolved by the homeowner without professional engineering and construction assistance to stop further growth.

The sinkhole’s void space made it unsafe for anyone to use the neighbor’s home drive-way without worrying the drive-way would collapse.  Once a sinkhole like this one opens there is no reliable way to ignore it and just hope for the best.  What sometimes looks like a minor issue when overlooked can turn into a tragedy.  Our sandy, decomposed granite soils in Southern California when exposed to water can be a problem for homeowners, especially in older communities built decades ago when building codes and standards were much less stringent. 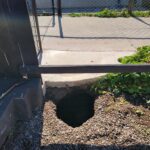 After reviewing the damage and conducting an engineering inspection of the site, including the neighbor’s driveway damage, we prepared a set of recommendations for the homeowner to review.  We suggested, and the homeowner agreed, that the best course of action was to fill the sinkhole with a lean slurry mix of concrete so the void would be filled in their backyard and extend under the neighbor’s driveway to prevent further problems. Using a lean slurry mix, as opposed to standard concrete, also would save the homeowner money on the project because of the high volume of fill material necessary to solve the problem.

A lean slurry mix of concrete is quite different from what most homeowners expect when they think about typical sidewalks and patios.  The intent here was to fill the sinkhole and stabilize it with a mixture of aggregate and cement.  That means the slurry mix was more liquid than normal concrete construction and contains more aggregate as a void-filler with a lesser amount of cement binding it together.  We’re not creating a pretty slab here, but instead are filling the hole to prevent further erosion that might cause more damage the next time it rains. 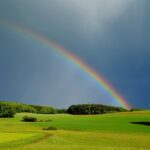 This project will have a happy ending once the necessary city review and permits are obtained so that work can begin to fill the hole. The neighbor will then be able to park in the drive-way again with confidence.  The homeowner’s backyard will be restored and usable without worry about the next heavy rain storm.  These neighbors are on good terms thanks to the recognition that when water flows it will eventually go downhill, which means if you live in a sloped or hillside neighborhood that inspecting your drainage annually is important.  Many times, small repairs to drainage systems prevent big problems in the long run.