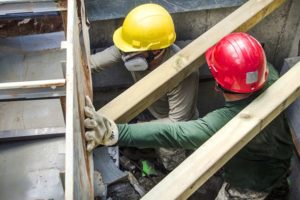 Shoring is a critical technique for many building renovation projects. If you have an older property that needs repairs or renovation completed, you may need to include shoring in your plans. Shoring a building consists of temporarily supporting the structure while critically important portions of the building are removed and replaced.  These include critical elements include foundations, load-bearing walls, and the roof.  Shoring can also be used to prevent collapse of building elements that are failing, and can allow the building to be safely occupied during repair construction.

Lelydorp Three of the most common are lateral shoring, vertical shoring, and excavation shoring.

Kālol Lateral shoring consists of a “raker” that provides horizontal support for a wall.  This type of shoring is most often used to support walls when the roof of a building is removed.  The raker shore is made up of inclined bracing (the rakes), a wall plate, and a floor plate or anchor.  Rakers are designed at inclinations to the horizontal of between 30 degrees and 75 degrees.  The horizontal spacing of the rakers is generally between 5 and 10 feet, and the top of the raker is generally attached to the top one-third of the wall.  The bottom of the rake is either attached to a concrete slab (with anchors) or to specially designed footings.

A vertical shore is a temporary support for a floor or roof of a building.  This type of shoring is designed to support the vertical (gravity and live load) loads of a building so that the building walls and wall sections can be removed.  Vertical shores look like building walls that are installed near the existing, load bearing walls that need to be removed and replaced.   They are often built of wood, with horizontal spacing as wide as practical to provide access for the repair and re-construction activities.

Excavation shoring is designed to support a building that is next to or above a proposed excavation.  This type of shoring is installed next to existing buildings that are next to a proposed basement excavation, or within an existing building that is having a basement constructed below it.  Excavation shoring is a combination of lateral shoring (to prevent the soils from laterally moving into the excavation), and vertical shoring (to prevent the collapse of a building above the excavation.

In each of the above types of shoring, the design engineer needs to know the weight of the building elements that are being supported.  In addition, the engineer needs to estimate the design lateral loading (typically wind and seismic) that are expected to occur during the design life of the shoring.  Because shoring is a temporary condition (often less than a year or two), reduced design loads (from those used for more permanent structures)  are often acceptable.  Soil conditions are also important, because all of the shoring types rely on the soil for their support, and in the case of excavation shoring, are part of the loads on the shoring.

There you have it. Have you ever completed a project on your property using shoring? Was it for renovation or repair? Let us know how the project went in the comments section, below. You can also join in on the conversation on our Facebook, Twitter or LinkedIn pages.