What Caused the Big Sur Landslide of 2017? 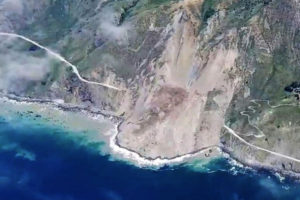 Wondering what caused the Big Sur landslide of 2017? Landslides can be one of nature’s most catastrophic forces. On May 20, 2017 California suffered its biggest landslide since the 1980s. A portion of Highway 1, not far from Big Sur, was buried under 30 to 40 feet of soil and debris.  Anything in its path was most likely swept away into the ocean below — altering the iconic coastline for years to come. Luckily nobody was killed, since the portion of the highway affected had been closed off due to smaller, earlier landslides that have been occurring since January 2017.Caltrans’ teams of engineers will monitor the site for weeks before they deem it safe for cleanup. The landslide may continue to move over the next few days or weeks. After cleanup, Caltrans will most likely either re-route the highway or construct a tunnel through the debris.

Big Sur, a popular tourist spot, will surely suffer if access to the area can’t be restored prior to July when the tourist season kicks off. While certainly not the fault of any one person or property owner, this landslide is a good example of why it’s important for property owners to ensure that they keep up on routine inspection of any slopes on or around their properties.

When the side of a hill or mountain, also known as a slope, becomes unstable a landslide can occur. Slope instability can be caused by multiple factors such as rain water accumulating and moving across ground surfaces. The water will find the path of least resistance, which can often be cracks in the ground caused by a lack of soil moisture. Because some soils are expansive, dry conditions will cause them to shrink, allowing water from rain or other sources to enter the cracks and destabilize the soil.

When a hillside has cracks in the soil layers, water can enter those cracks. This creates pressure that pushes against the upper layers of soil, assisted by gravity, and as a result the soil will move down the slope. This causes mudslides or landslides, much like this one in Big Sur or the deadly 2015 slide that occurred between Gorman and Santa Clarita, California.

There are multiple types of slope instability, such as rotational, block/transitional, rock fall, topple, debris flow and avalanche, earth flow, creep, and lateral spread. These are typically comprised of materials like bedrock pieces, gravel, cobble, boulders, sand, silt and clay.

As stated earlier, water often contributes to landslides. Erosion from the ocean can often wash away the stable base along the coastline below the area, causing the instability, resulting in either a planar or rotational failure. Another factor can be saturation of the soils, which, when paired with a lowered water level adjacent to the slide (think dwindling rivers and lakes caused by drought) can cause hydraulic pressure on the soil which will then be dragged downward into a slide by gravity.

Soil saturation can be caused by rainfall, over-irrigation, swimming pool leaks, diversion of water flow from nearby properties, water supply-line leaks or drain-line leaks. In fact, almost any source of water can be the culprit. Severe rainfall in Northern California due to the 2016-17 El Niño may be a big contributing factor to the Big Sur landslide as well as others occurring throughout the state.

While engineers don’t yet know exactly what led to this landslide, they will be sure to learn from this event as they plan future projects along the coastline.

Has your property been affected by landslide? Share your story in the comments, below.